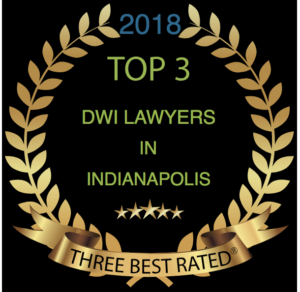 On September 12, 2018, Attorney Marc Lopez received notice that he’s been named one of the “Top 3 DWI Lawyers in Indianapolis” by the website ThreeBestRated.com. Attorney Marc Lopez absolutely loves being recognized for something he has spent his entire legal career trying to excel at. This award and recognition is no exception.

What’s the difference between DUI & OVWI & DWI in Indiana?  Trick question—there is none.

Attorney Lopez started at the absolute bottom of the Prosecutor’s Office and worked his way up to Marion County’s highly-trained “OVWI Unit.” Along the way, he handled thousands of criminal cases and countless trials. He learned the ins and outs of the courtroom process and was happy to feel like he was making a difference in the community. Over time, though, something changed. He began to feel like a bully.

With non-DUI / OVWI crimes, he was able to provide defendants with alternatives, some of which allowed for the case to be resolved without a life-altering conviction. When it came to DUI / OVWI charges, however, he had no discretion. At the time, the Prosecutor’s Office had a straightforward approach to DUI / OVWI: It is better to go to trial and lose than to offer the defendant a non-DUI / OVWI plea or resolution. Attorney Marc Lopez hated the thought of regular, hardworking people being saddled with a conviction because of a single mistake. This inflexible approach to DUI / OVWI charges started to make him feel like he was professionally obligated to kick people when they were down.

During his time as a Prosecutor, Attorney Marc Lopez learned that only a handful of attorneys in the Indianapolis area actually took DUI / OVWI cases to trial. When he realized that only one of them, the now-retired Attorney Jess Paul, actually understood the science behind blood and breath tests well enough to mount a credible defense, his misgivings crystallized into a plan of action. Attorney Marc Lopez left the Prosecutor’s Office and started his own law firm. He made it his goal to help the little guy fight back against the State of Indiana, and he made himself a promise: Not only would he be a fantastic trial attorney, but he would learn the science of DUI / OVWI in order to better serve his clients.

Attorney Marc Lopez made good on his promise. In 2010, he completed a week-long Trial Practice course on DUI / OVWI defense led by nationally-renowned  DUI / OVWI Attorney Pat Arata and Attorney Mike McDaniel. In 2011, he spent a month at Gerry Spence’s Trial Lawyer’s College in the mountains of Wyoming. While the Trial Lawyer’s College was not DUI / OVWI-specific, he learned valuable trial practice skills and insight into how to meaningfully connect with juries. There was no internet. There was no cable television. Over the course of four weeks, a group of 50 attorneys shared two landlines. There was no cell phone reception unless you were willing to walk two miles up a mountain. Without distractions, it was much easier to focus on interpersonal relations, and it is impossible to overestimate the importance of good communication, especially for lawyers. Years later, Attorney Marc Lopez continues to get together with the local Trial Lawyer’s College group to work on cases.

While trial practice is important, Attorney Marc Lopez has also learned the science behind blood and alcohol testing. Through the National College for DUI Defense (NCDD), he spent a week in Colorado learning the science behind blood alcohol testing. A separate week was spent in Texas with hands-on learning in the science of blood drug testing. Another three days were spent in Georgia learning about metrology, which is a fancy way of referring to the study of lab tests to determine the accuracy of their measurements. Attorney Marc Lopez also completed NCDD’s Mastering Scientific Evidence seminar held in Louisiana.  In 2017 the National College of DUI Defense commended Attorney Marc Lopez for completing the NCDD Advanced Curriculum in Forensic Science and Trial Advocacy.

Armed with experience and advanced training, Attorney Marc Lopez uses his knowledge of the physical laws of nature to better apply the normative laws of society. He has helped hundreds of people. He has won cases that were professionally assessed as “hopeless.” He has lost cases at trial that nevertheless produced a better outcome for his client than the most generous plea offer. In order to keep his promise to himself, he has basically been compelled to learn everything there is to know about an Indiana driver’s license, including how to legally get people back on the road. There is no DUI / OWVI situation where Attorney Marc Lopez cannot help. While he cannot promise to beat your case, he can promise to fight like all hell.